VFR, the new buzz word in the oilfield! What is it? 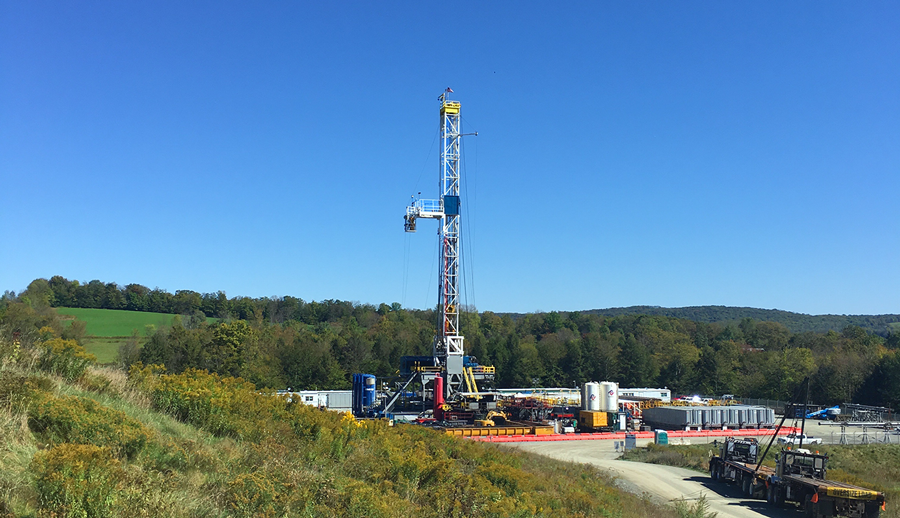 There’s been a lot of talk in the last eight months about SWPM (Sealed Wellbore Pressure Monitoring) with Devon’s patent-pending technology but, have you heard the acronym VFR? No, it’s not Visual Flight Rules. But, if you answered Volume to First Response, skip to the front of the line.

Operators looking for cost-effective fracture diagnostics, especially in this low price environment, have been setting up well pads with SWPM wells offered exclusively by Well Data Labs. One of the primary measurements from SWPM is VFR. VFR is the slurry volume of the active well when a pressure response is first observed in the sealed wellbore. A lot can be learned by tracking VFR by stage, depending on how you set up your SWPM test. If for example, you are interested in cluster efficiency and you design different stages along the lateral with varying number of perforations, then a larger VFR is a good indication that you have better cluster efficiency.

The figure below illustrates the difference between near 100% cluster efficiency stage on the left and a stage with a run-away dominant fracture on the right. Assuming equal injection rate in both cases, a response would occur more rapidly in the stage with the dominant fracture growth resulting in a low VFR. The ~100% cluster efficiency stage would yield a large VFR as the injected frac fluid would be more evenly distributed between the multiple fractures and arrival at the monitor well would be delayed. (Domelen SPE 204193) 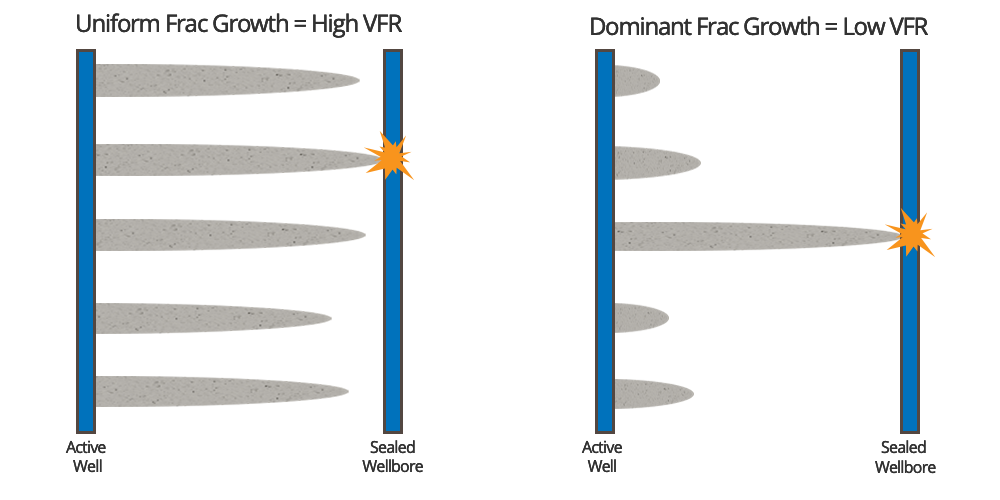 Other interesting things you can determine from the VFR are stage length efficiency, hydraulic fracture height, asymmetric fracture growth due to pressure depletion, poor cement in the lateral, and the creation of super fractures.

Today, an SWPM evaluation is done quickly by Well Data Labs after the well pad is completed. Soon, there will be real-time VFR measurements so real-time decisions can be made by the Operator to customize the frac job as it is pumped. This real-time data will terminate the days of geometric frac jobs where every job is the same in the well or the field. Real-time information to reduce job size because the fracture has extended far enough or increase job size to ensure proper drainage of reserves will allow completion costs to be spent more wisely on value-added fractures which will help get the unconventional industry back on its feet.

So now you know the new buzz word – VFR! If your company is interested in optimizing its completion dollars, give Well Data Labs a call! We can help design your well pad to help answer the questions you are trying to answer and get the most of your $$$’s spent.

Got a fracture diagnostic dilemma?

Scroll to the bottom, complete the form, and we’ll send you our Fracture Diagnostic Decoder.

Have you ever wondered what data acquisition methods are best for evaluating resource uncertainties?  Wonder no more.

Complete the form to get our Fracture Diagnostic Decoder.

For more information about our Professional Services, or if you have a need not covered above, send us an email at services@welldatalabs.com or give us a call at 720.662.7771. Let us know what we can do to help you!

Monitoring the Pulse of a Well Through Sealed Wellbore Pressure Monitoring, a Breakthrough Diagnostic With a Multi-Basin Case Study, 2020, SPE-199731-MS

Karen Olson has 37 years of industry experience and joined Well Data Labs as a senior completions adviser. She previously served as Director of Technology at Southwestern Energy, where she led a multidisciplinary team responsible for optimizing Marcellus completions. Prior to Southwestern, she was BP’s completion team leader for the newly-discovered deepwater Paleogene/Lower Tertiary fields in the Gulf of Mexico. Olson is co-founder and chair of the Society of Petroleum Engineers’ WoMen in Hydraulic Fracturing group. In 2019, she received SPE’s International Sustainability and Stewardship Award.