Got casing deformation? Have you looked at your frac data? 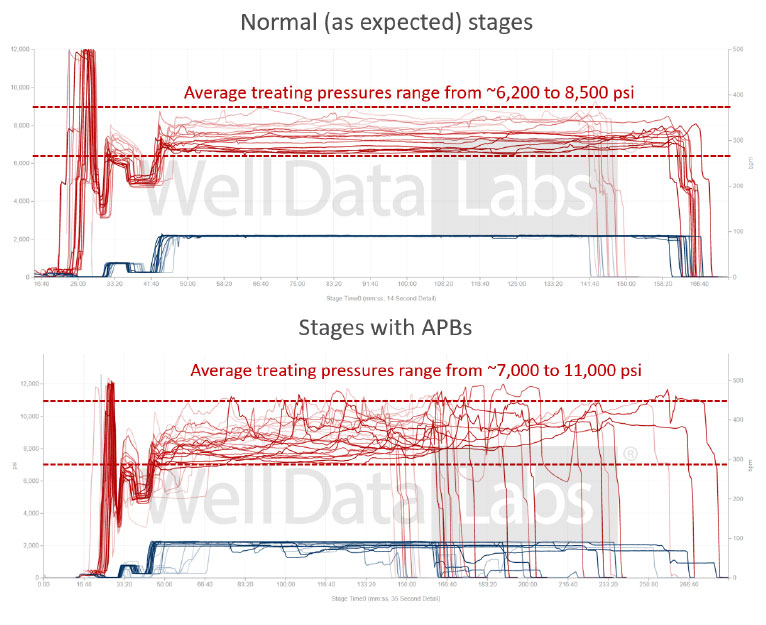 The trend in hydraulic fracturing has been to push the envelope on drilling longer horizontal laterals with an ever-increasing number of stages, clusters, proppant, and fluid volumes. As completion intensities have increased, there has been an associated increase in casing deformations leading to partial or complete restrictions in the lateral. Publications and poll surveys agree that the overwhelming majority of casing deformations occur during hydraulic fracturing operations. Until now, few case studies have examined the high-resolution fracturing treatment data to identify characteristic pressure signatures related to casing deformation or failures.

In our work, we looked at a data set that included 17 wells with casing deformation. These wells were located in two very different basins – the Eagle Ford and the Powder River. The casing deformations were discovered during drill-out of the frac plugs. In this data set, there were more than 500 stages to be reviewed. As we worked through the frac data, we noticed several characteristic pressure behaviors associated with the instances of casing deformation. We coined the term Abnormal Pressure Behaviors (APBs) to describe these pressure signatures.

Here is an example of an APB signature – one characteristic of a plug slippage. For this signature, we looked for an almost instantaneous pressure drop, with no corresponding change in rate, and generally in the absence of an initial perforation erosion signature.

Historical review of frac data can be time-consuming and complicated by normal variations in the treating pressure behavior as the completion progressed along the lateral. In the January 2021 issue of the Journal of Petroleum Technology, the article referred to this as a “Tangle of Fracturing Data” (reference January 2021 JPT).  The plots below illustrate the difference between the normal stages (top image, count = 19 stages) and stages with potential casing deformations (bottom image, count = 25 stages). The characteristic signatures for the problem stages are indeed a tangle of pressure data. A deeper investigation revealed that the difficult stages were completed where the lateral was landed at the transition between two different formations.

We realized that if we could develop an automated method to identify the APBs – as soon as they occurred – we could move the decision-making process from a reactive to proactive mode. With an early warning of pending casing deformation during a frac stage, it would be possible to make changes in the execution of that stage and recommend changes to future completion programs to prevent similar operational issues.

The workflow developed was utilized by our partner in their future completions. Prior to completing new wells, the completion supervisors were made aware of potential problem zones along the lateral. Alternative procedures were developed for both fracturing and drill-out operations in wells with suspected casing deformation. Moving forward, our partner completed an additional 48 wells with no operational issues.

Teasing Meaning Out of a Tangle of Fracturing Data (PDF), Journal of Petroleum Technology, January 2021

How can we help?

With nearly 40 years in the oil and gas industry, Mary is a leader and an innovator. She is a recognized expert in completion engineering and has worked for well-known operators across the globe. She has numerous patents and has received multiple awards from the Society of Petroleum Engineers (SPE), and has twice been a Distinguished Lecturer.

Get the case study in your inbox!

SEND ME THIS STUDY